A surprising amount of information about individuals are public records. For example, in Washington State, the Public Records Act makes most state and local agency records public. That is to say anyone can look at this information. However, there can be considerable risk in using public records. Before the internet, finding this information often meant going to an obscure location and digging through paper records in books or on microfiche. Therefore, although the information was public, it was for all intents and purposes private.

To see the impact of the internet on public records consider Zillow. Zillow is an internet real estate and rental market. Zillow indicates it uses property information, for example about sales, that it gets from the municipal and county offices responsible for recording real estate transactions. Rules for accessing public records vary. In some cases, the data is free. In other cases the public agency may even charge for public data if it is used for commercial purposes. Few people appear to complain about Zillow’s use of such records. They like being able to see what someone paid for a house, or what a house in their neighborhood is worth. No one wants get in their car, drive to the county records office, and pour through the Torrens records to find this data on their own.

But there can be a risk of using public records. The public will not always be forgiving when information about them is widely dispersed. Even if the underlying information is a matter of public data. 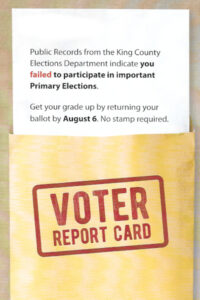 An organization in King County in favor of a ballot proposition recently sent out a “Voter Report Card.” The card was addressed to an individual who had not voted in previous primary elections. The goal was to encourage the recipient to vote in the upcoming election. And to vote in favor of the organization’s proposition. So while the intent may have been good, this particular attempt failed.

The card admitted “the public records used to create this report card are available at King County Elections.” To clarify, how you vote is secret. On the other hand, that you vote is public. Consider the risk of using public records in this case. First, individuals believe information about voting is private. That we vote by secret ballot. Second, the card is readable by anyone. There is no envelope, it is a postcard. And what if the report card was delivered to a wrong address. Which is how I learned about it.

This election was going to have a low voter turnout. A primary election in the middle of August. The intent was valid. The proposition was for a good cause, although people are often reluctant to approve ballot measures that might raise costs or taxes. However, many people saw this as using public records to bully the person who, for whatever reasons, chose not to vote. Which is their right. Did people not vote, or vote against this proposition because they were so offended by this use of public records?

Public records are valuable. They can be commercialized. They can inform. However, such data should be handled with care. Particularly if there is a chance that a person may not realize their data is a public record. Or if exposing the public record to a large number of people has the potential to be offensive.

It is a matter of trust. If an organization exercises bad judgment with public data, what are the chances they will exercise good judgment with data they must keep private. Can you trust their privacy policy? Do you want to do business with them?

If you are considering using public data consider this test. Gather the public information about you and your organization’s top executives. Use it as a sample of how the data will be used. Show it to them. If they are willing to let their data be exposed in this fashion it might be okay. But you’ll be surprised how often these executives will want to protect their privacy. Not saying it’s a perfect test, but it may help you think twice about your approach.

Oh, and for what it is worth, as of election night the ballot proposition was failing.

Disclaimer: Nothing in this post is legal advice. Before taking action about any matter discussed in this post you should consult with an attorney.